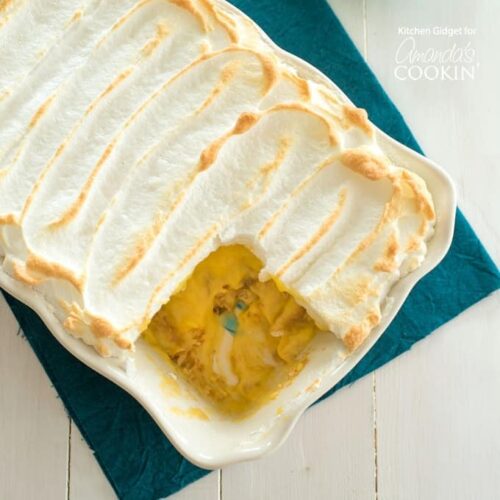 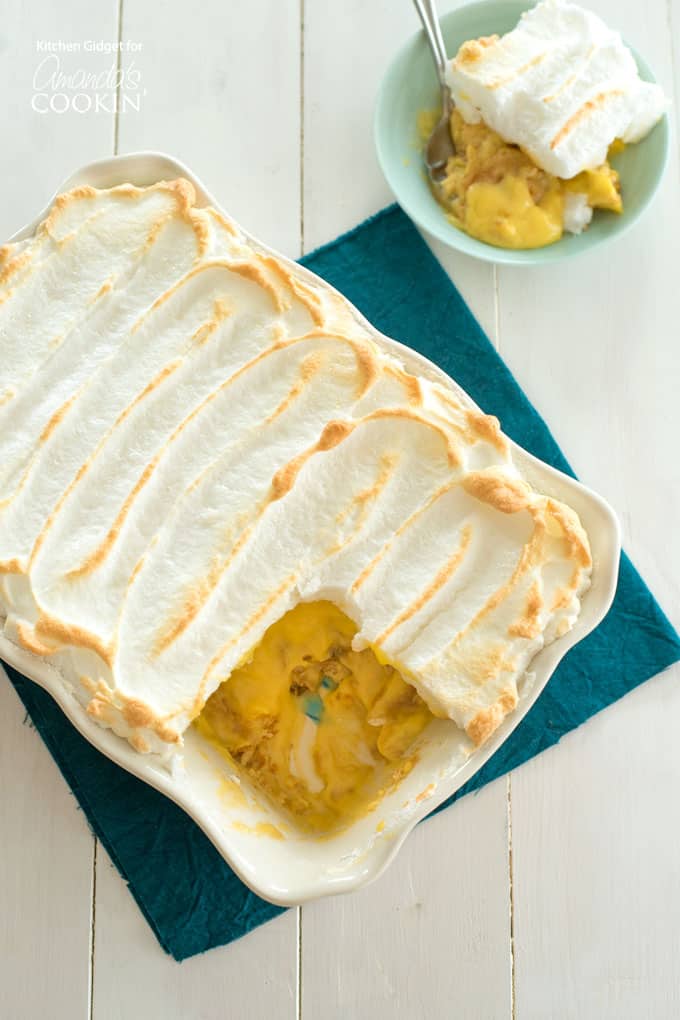 A few years ago I was vacationing in North Carolina. We ate at a roadside buffet featuring Carolina BBQ and for dessert, there were huge trays of homemade banana pudding. It was the best banana pudding I’ve ever had! There were layers of vanilla wafer cookies, sliced bananas, and real vanilla pudding. It was topped off with a cloud of heavenly meringue. As I was licking my fingers, I knew I had to recreate this masterpiece at home.

This classic dessert is amazing all year long, but it’s especially fitting for summer since it is (nearly) no-bake. I heard some parts of the country are still getting snow, but it’s been hot here. I realized as I was baking Taco Pizza Appetizer that I wouldn’t be turning on the oven much longer. But that’s ok because I adore summer potluck desserts like No-bake Pineapple Cheesecake Bars.

The secret to southern banana pudding is the pudding from scratch which uses egg yolks to make it rich and creamy. The whites don’t go to waste since they get turned into a fluffy marshmallow-like meringue. If you don’t want to turn on the oven or your broiler, it also tastes divine topped with whipped cream. Save the egg whites for another purpose.

RELATED: Want another classic dessert recipe? This Ambrosia Salad is a famous one! You see it at most potlucks, BBQ’s.. you name it. This vintage recipe combines fruit cocktail, pineapple tidbits, mandarin oranges, maraschino cherries and marshmallows to create a satisfying dessert! 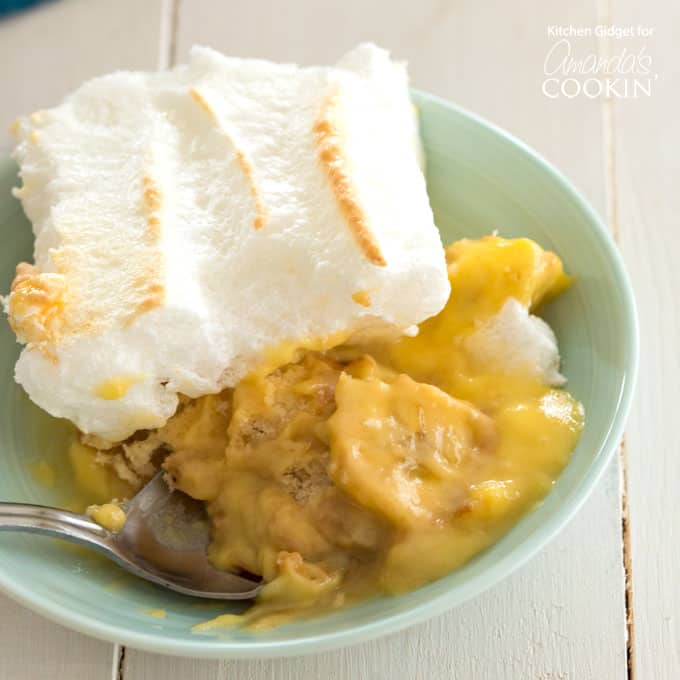 Ingredients You Will Need: 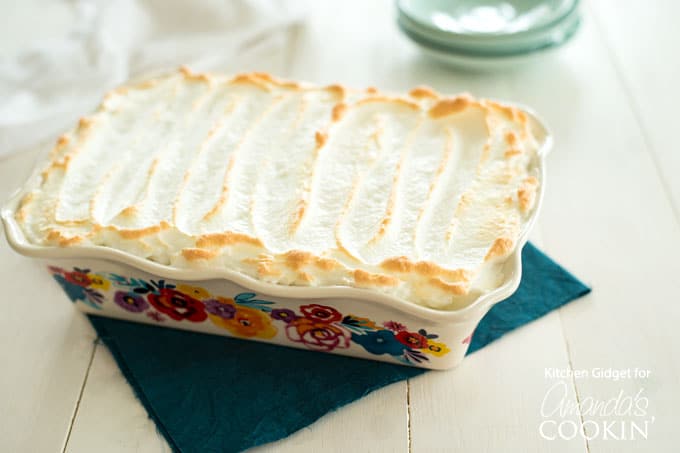 You might think making the custard would be complicated, but it’s not! Opening pudding box mix is so easy, but it’s got nothing on the taste of homemade! So, here are all my tips for making homemade banana pudding:

Use vanilla wafers. I’ve seen it done with other butter/shortbread cookies, but it’s just not the same as the real deal!

Use ripe but not overly-ripe bananas. They should be yellow with little brown speckles on the skin. Once sliced, toss them with a splash of lemon juice to prevent them from turning brown, especially if you plan on serving this the following day.

Don’t burn the custard. Use a double boiler (or a heatproof bowl set over a pot of simmering water) if you have a tendency to scorch things. It takes about 10 minutes of frequent stirring until it is thickened, but I promise it’s worth every minute.

For the meringue, make sure your electric mixer is thoroughly clean and dry. Sometimes I wipe my bowl and beaters down with white vinegar to ensure there’s no greasy residue left. Grease will hinder the whites from fluffing up and forming stiff peaks when you beat them. 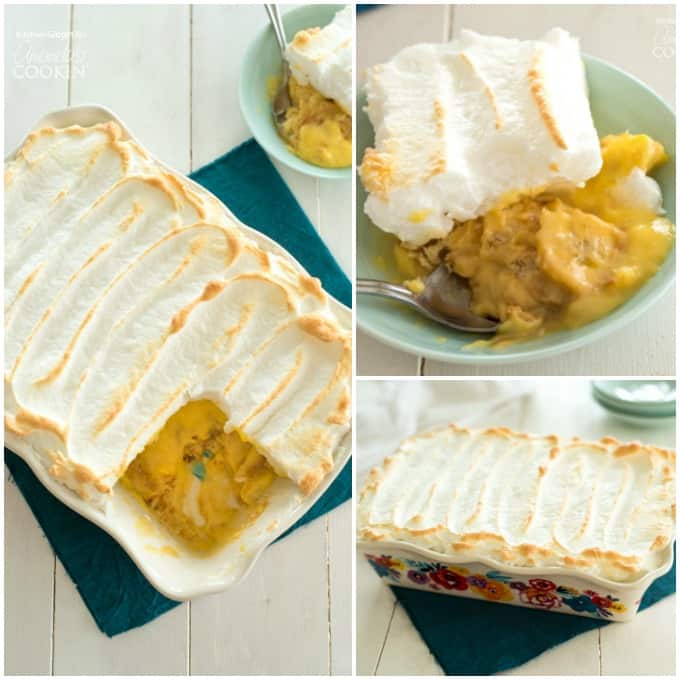 Everything is layered in a dish and the meringue gets toasted in the oven or under the broiler for a few minutes. Lastly, chill this dessert after toasting the meringue. If you try to serve it right away, the pudding will be too runny. Chilling it also give the cookies a chance to soften. And there you have it – homemade banana pudding from scratch!

Have a lot of bananas to use up? This Banana Cake with Vanilla Cream Cheese Frosting is calling your name! Or try some more of our favorite banana recipes on the blog like this Banana Cream Lush recipe, Banana Split Dessert, or the famous Banana Pudding Poke Cake. 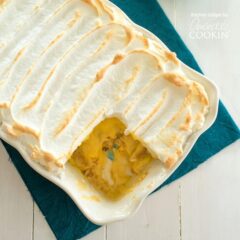 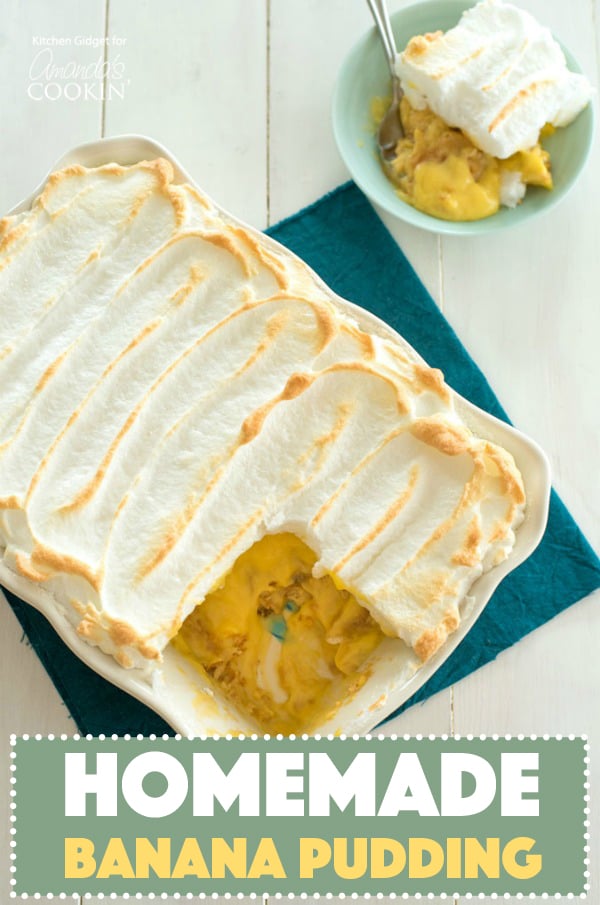 Blogger at Kitchen Gidget
Rebekah Garcia is the food blogger behind Kitchen Gidget. She creates recipes influenced by her Midwestern roots, Hispanic heritage and insatiable sweet tooth. When she’s not cooking, you can find her at the beach with a good book. She is married to the man of her dreams and home is where the military sends them. She believes food is better when shared…unless it’s the last bite!
Follow along 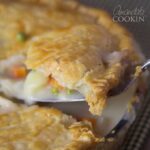 After Thanksgiving there's always a bunch of ... END_OF_DOCUMENT_TOKEN_TO_BE_REPLACED 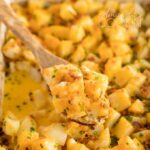 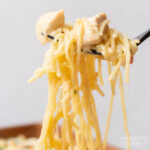 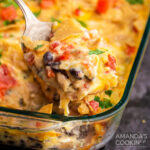 Just 30 minutes in the oven and your family ... END_OF_DOCUMENT_TOKEN_TO_BE_REPLACED

This pineapple dream dessert is one of my ... END_OF_DOCUMENT_TOKEN_TO_BE_REPLACED

This no-bake Chocolate Lasagna is filled with a creamy ... END_OF_DOCUMENT_TOKEN_TO_BE_REPLACED

My family loves my soft peanut butter cookies and my ... END_OF_DOCUMENT_TOKEN_TO_BE_REPLACED

Have you ever heard of John Wayne Casserole? Delicious ... END_OF_DOCUMENT_TOKEN_TO_BE_REPLACED

This creamy crockpot mac and cheese starts with ... END_OF_DOCUMENT_TOKEN_TO_BE_REPLACED