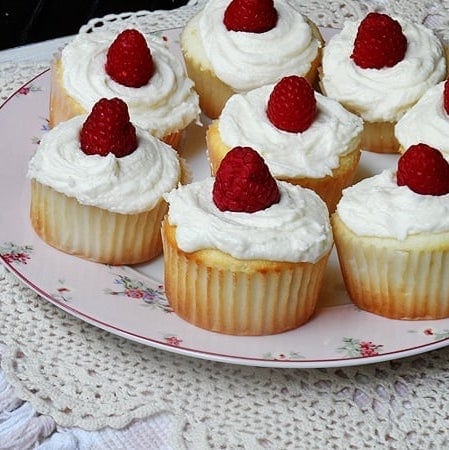 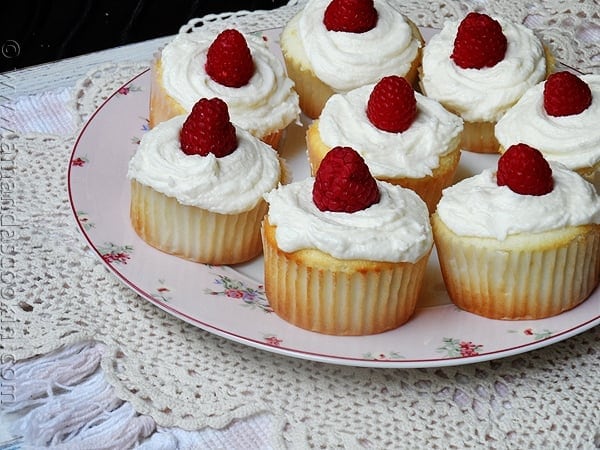 July 31st is National Raspberry Cake Day. I know right? Who knew? I made these Raspberry Filled White Chocolate Buttercream Cupcakes today, just because. I searched and discovered I only have a couple of recipes here that raspberries are the star of, so another was certainly in order. Raspberry picking season will be starting soon around here, so while I can certainly get them at the grocery store, I’m looking forward to having some fresh from the plant! 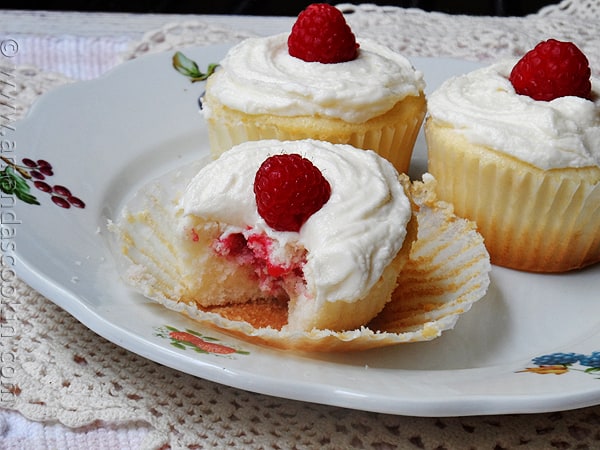 I was pretty surprised to see that I haven’t really baked with raspberries for a few years. There’s this Raspberry Upside Down Cake I made four years ago and this Raspberry Coffee Cake I made around the same time. This English Trifle Cheesecake from last year is positively amazing, one of my favorites, and on the non-baking front there’s this Fresh Raspberry Lemonade. 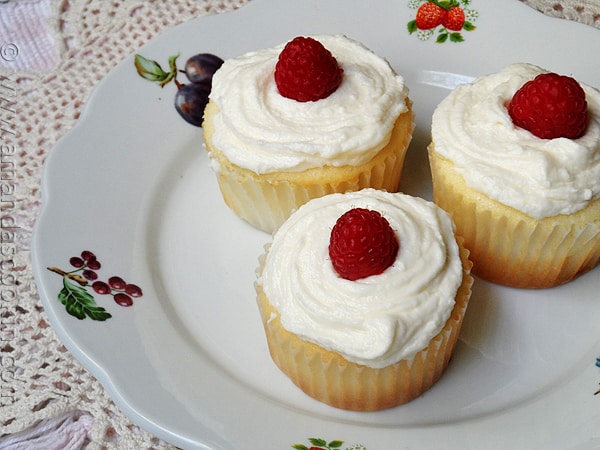 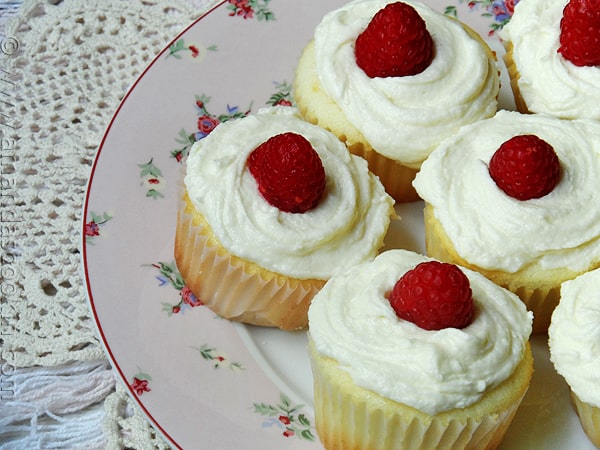 But I digress! I could recipe remreminisce all day, but chances are you came for the cupcakes you see here. Let me start by saying that I found this recipe on AllRecipes.com. 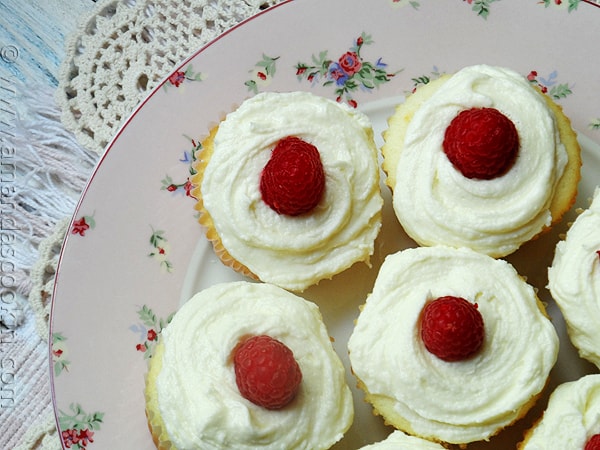 However, instead of using a white box cake mix, I made my favorite white cake, which comes from Dorie’s book, Baking From My Home to Yours. 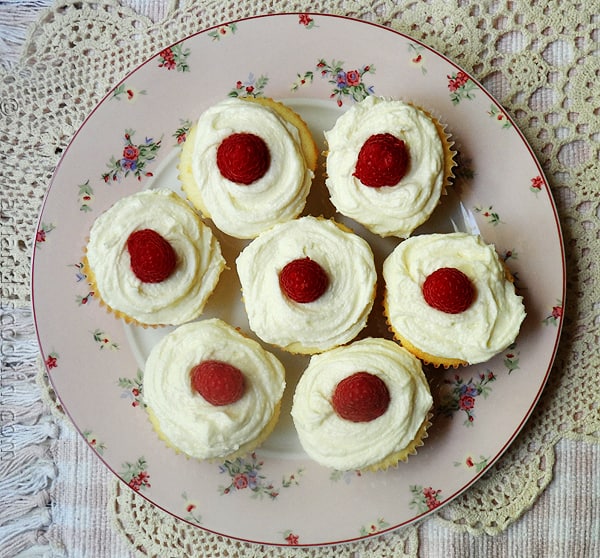 I followed the recipe for the filling, only I simmered mine about twice the amount of time as it called for. Many of the reviews said to double the cornstarch, but that’s not necessary. All that’s needed to thicken the mixture is to simmer it longer. However, that reduced the amount of filling too, so next time I would use 10 ounces of berries instead of 8. 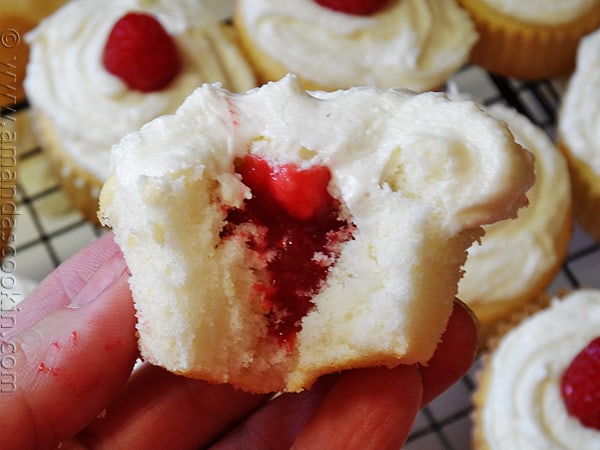 I also pushed it through a sieve to remove the seeds. In hindsight it might have been easier to do that step right out of the mini food processor, but this way worked too. 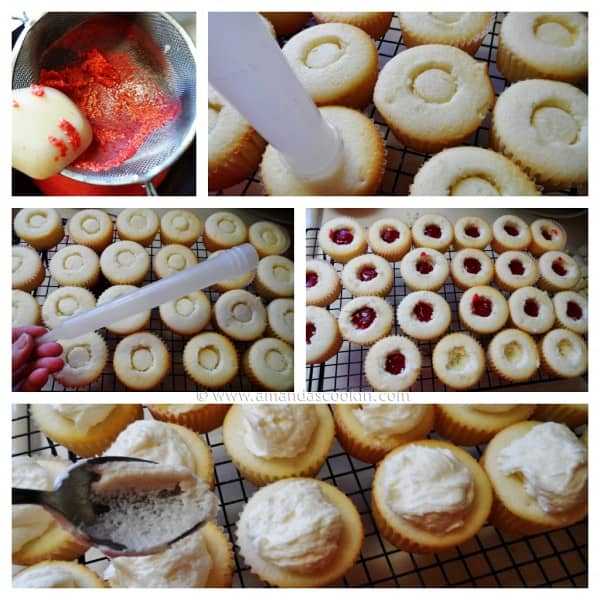 To make the holes for the filling, I used a turkey baster. That’s right. I have ALL the high tech gadgets.

Finally, the buttercream recipe is way too much for these cupcakes. At least the way I made them. I didn’t pipe the frosting on, so I probably used less. I made the mistake (and I totally knew better) of not letting the melted white chocolate cool completely before adding it to the frosting in the mixer. That’s why my frosting has kind of a rough texture, but believe me, it didn’t affect the flavor! 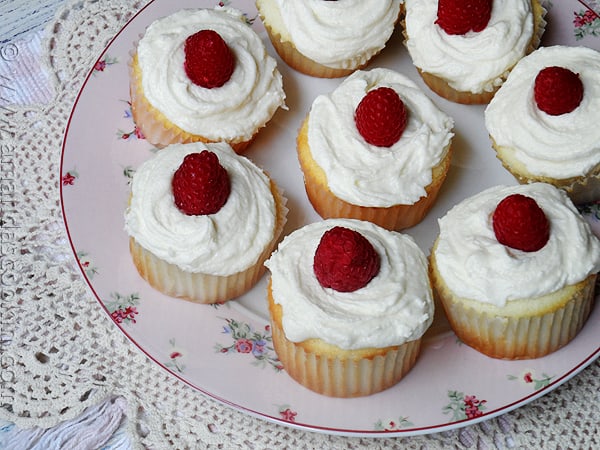 This frosting is very sweet, but the tartness in the raspberry filling works beautifully with it, giving it a perfect balance. These were definitely delicious.

You could minimize the work by using box mix, raspberry jam, and canned frosting. Totally up to you. I prefer the from scratch method, but sometimes time isn’t on your side and you must improvise. :) The canned frosting won’t be white chocolate flavored, but mixing in the cooled melted chips would probably work just fine. These are super pretty and great for a bridal or baby shower or even afternoon tea, if you still partake in that sort of thing. These were fun to make and tasted great. Enjoy!

NOTE: If you are making these the night before you may want to wait until morning to make the frosting. Placing the frosting in the fridge will cause the white chocolate to harden. It can be thawed int he microwave but may not have the same texture. Thanks to Jeannie for letting me know about this! 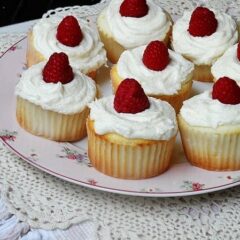 Saturated Fat 7.4 g, Polyunsaturated Fat 0.3 g, Monounsaturated Fat 2.3 g, Cholesterol 23.6 mg, Sodium 143.4 mg, Potassium 45.8 mg, Total Carbohydrate 39.0 g, Dietary Fiber 1.7 g, Sugars 27.0 g, Protein 3.3 g If you are making these the night before you may want to wait until morning to make the frosting. Placing the frosting in the fridge will cause the white chocolate to harden. It can be thawed int he microwave but may not have the same texture.
Tried this Recipe? Pin it for Later!Follow on Pinterest @AmandaFormaro or tag #AmandasCookin!
Follow along 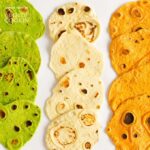 How to Make Your Own Flavored Flour Tortillas 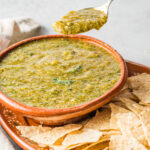 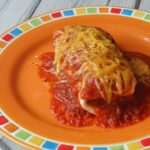 I've never actually had an Enchirito from ... END_OF_DOCUMENT_TOKEN_TO_BE_REPLACED 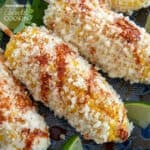 Mexican Corn on the cob with cotija cheese, ... END_OF_DOCUMENT_TOKEN_TO_BE_REPLACED

This pineapple dream dessert is one of my ... END_OF_DOCUMENT_TOKEN_TO_BE_REPLACED

This no-bake Chocolate Lasagna is filled with a creamy ... END_OF_DOCUMENT_TOKEN_TO_BE_REPLACED

My family loves my soft peanut butter cookies and ... END_OF_DOCUMENT_TOKEN_TO_BE_REPLACED

Have you ever heard of John Wayne Casserole? Delicious ... END_OF_DOCUMENT_TOKEN_TO_BE_REPLACED

This creamy crockpot mac and cheese starts with ... END_OF_DOCUMENT_TOKEN_TO_BE_REPLACED