This post is in partnership with Warner Bros. Pictures for Paddington 2! No matter where Paddington goes, he makes the world a brighter place. So we thought we’d make some fun Paddington inspired teddy bear toast to put a smile on your child’s face and to get them excited for the upcoming sequel! 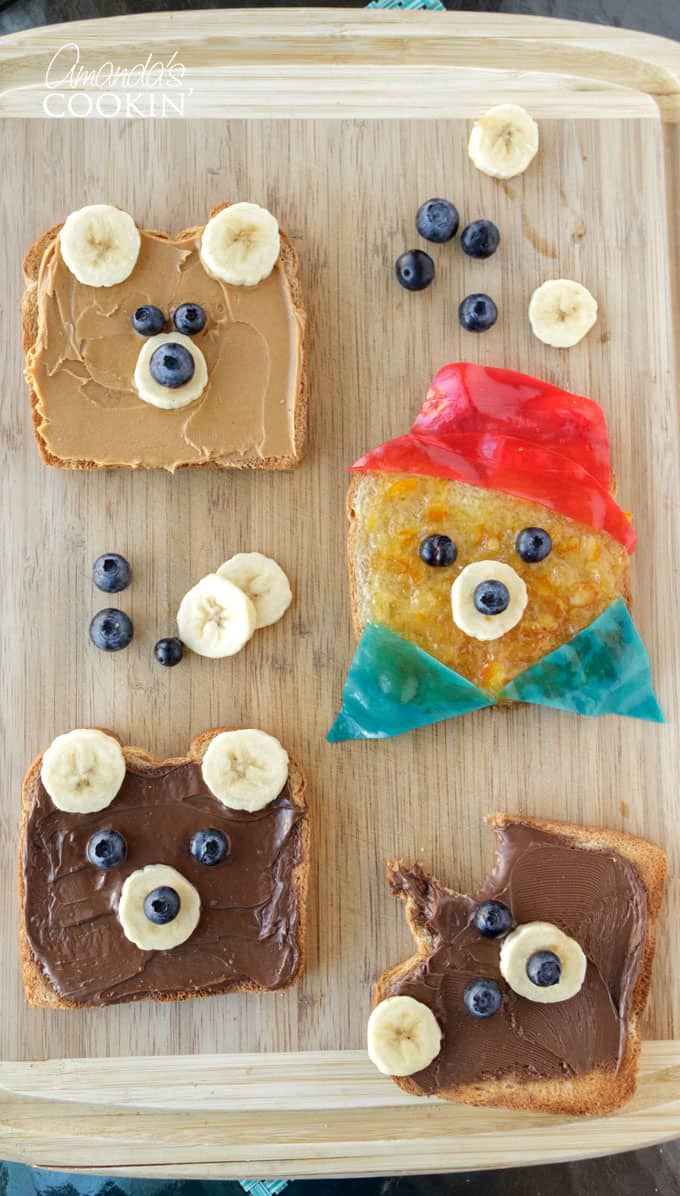 Following one the most successful family hits of all time, “Paddington”, came a sequel everyone was bound to adore. Paddington, who loves marmalade and spreading joy all the way from Peru to London inspired this fun and easy teddy bear toast recipe! 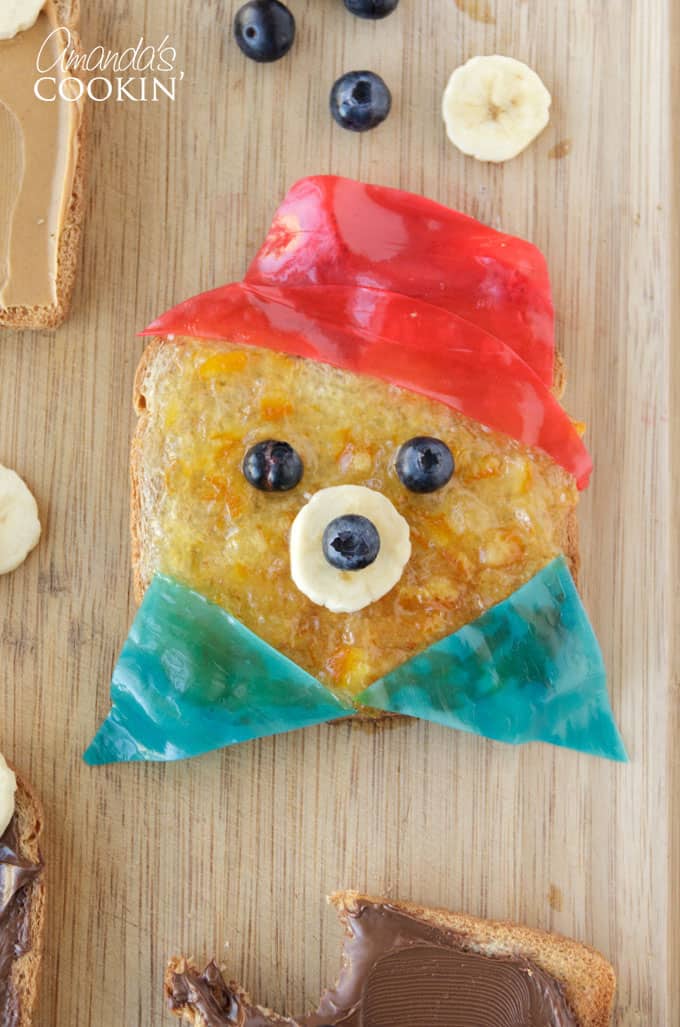 I mean, who can really resist an adorable teddy bear face? Then you combine that with toast, fruit and your choice of marmalade, chocolate hazelnut spread or peanut butter and you have yourself a cute little snack (did you ever think you’d be calling your snacks cute?!) 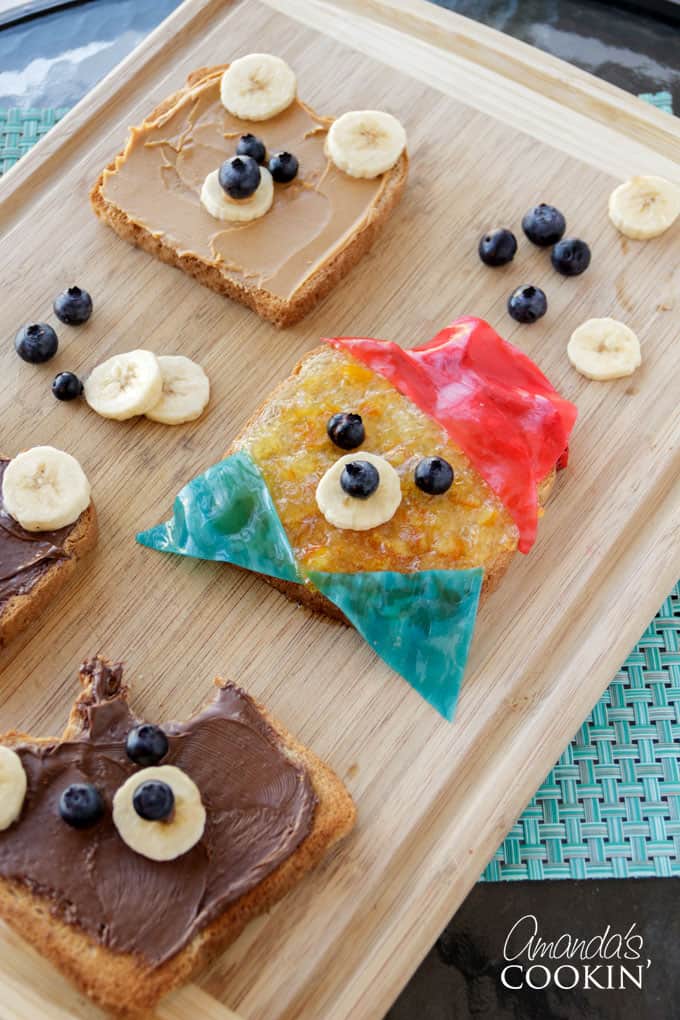 Making this bear toast doesn’t require much time or skill which makes it the perfect food-craft to do with your kids! 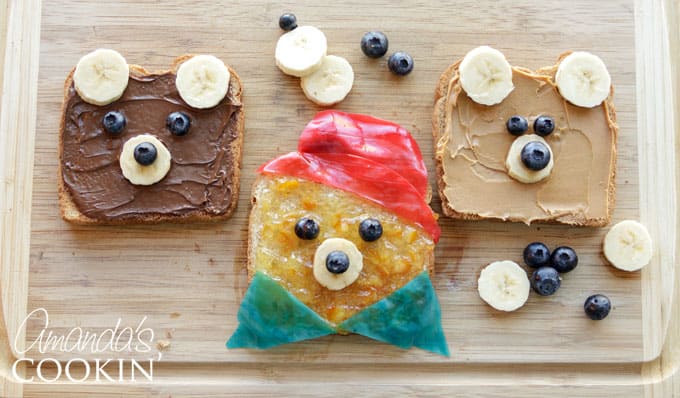 Be sure to watch the trailer below of the heartwarming sequel (available on DVD, Blue ray and other platforms)!

How to make Paddington Bear Toast 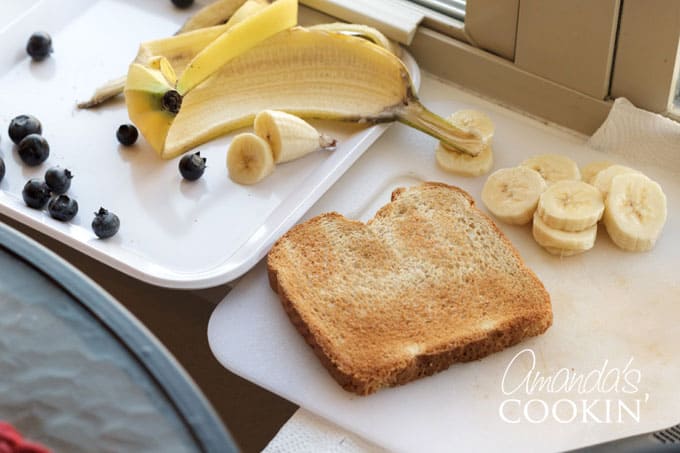 First, start by cutting banana slices and picking out blueberries of the same size. You want the blueberries to be close in size so the eyes are equal. You can use a larger blueberry for the nose! 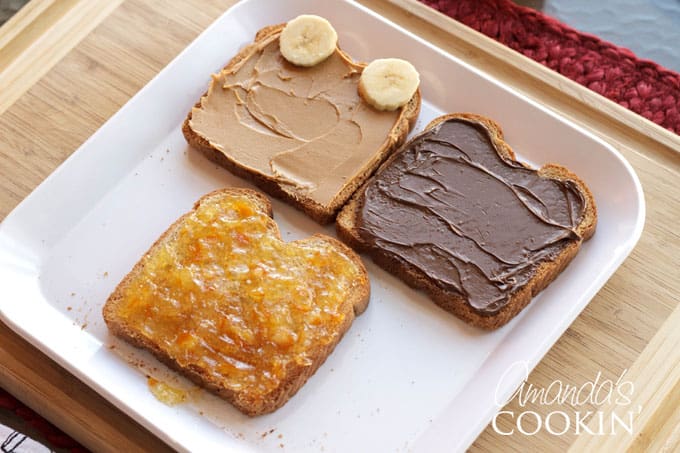 Toast your bread and spread either Nutella, peanut butter, or marmalade onto the toast while it’s still warm.

After you put on your spread, add two banana slices to the top corners of the toast to act as the bear’s ears (if you’re making the Paddington inspired toast, you can skip putting on the banana slices for the ears). Then add a banana slice for the nose in the middle of the toast. 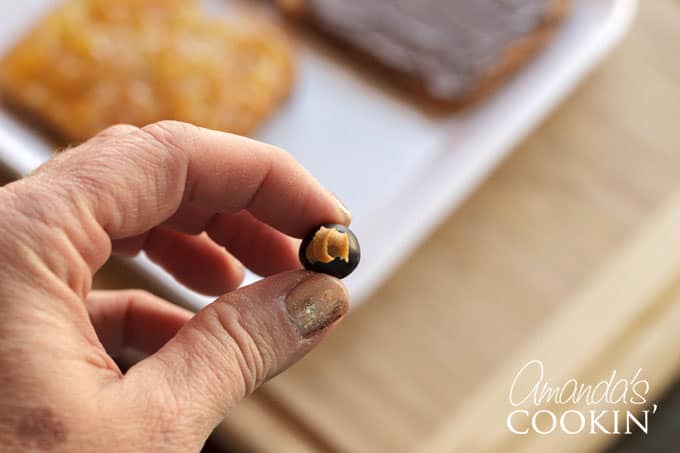 Take whichever spread you’ve chosen and add a small dollop onto the back of a blueberry, then place that onto the banana slice you are using for the nose. This keeps the blueberry from sliding off. 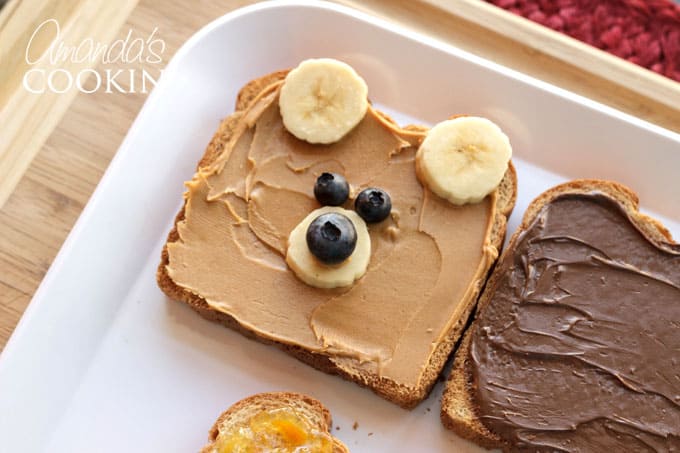 Add two blueberries for the eyes, however close or far apart as you’d like.

For the Paddington bear toast, flatten a red fruit roll-up by unrolling it.

HINT: You might want to try our healthy and easy Homemade Fruit Roll-Up recipe!

Have an adult take clean scissors and cut a curved/crescent shape out of the fruit roll up, also cut out a square/oval shape. This will make Paddington’s hat. 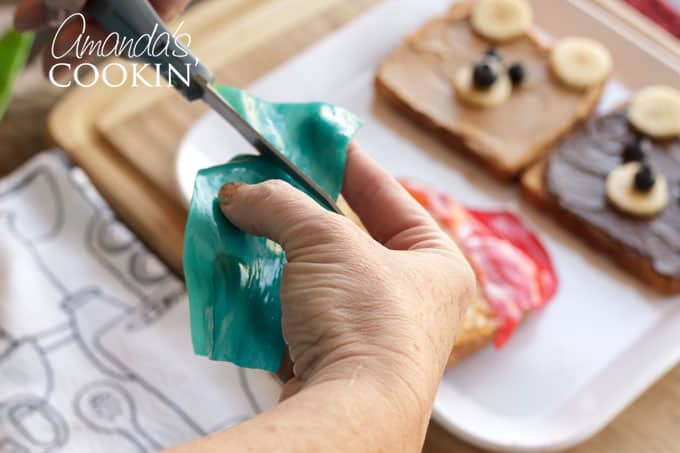 Then, roll flat a blue/green fruit roll-up and cut the green side off with clean scissors. Cut two triangles out of the blue roll-up for Paddington’s jacket collar and place onto the toast! 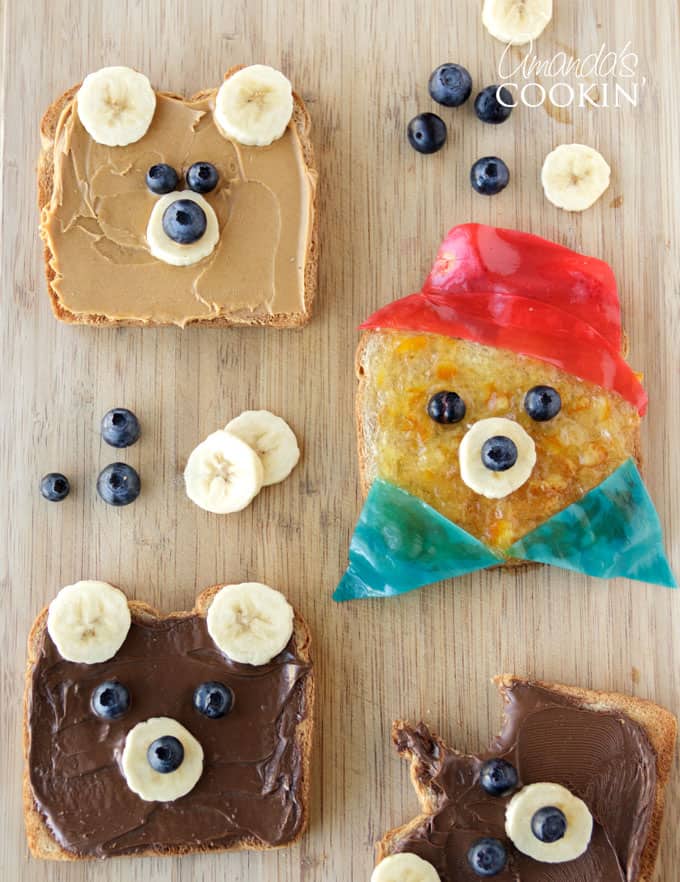 Kids will swoon over this Paddington inspired bear toast, and they will love helping make it as well! Can you think of a better way to eat your toast in the morning? For another fun character inspired treat, check out our Cookie Monster Freakshakes! 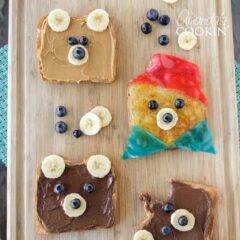 Calorie count does not include fruit roll-up.

This post was originally published on this blog on Jan 6, 2018.

Editorial Manager at Amanda's Creative Life, Inc.
Kristen is the editorial manager for both Amanda's Cookin' and Crafts by Amanda and the daughter of the founder, Amanda Formaro. She is getting wildly creative with food and enjoys being in the kitchen and learning new things!
Follow along 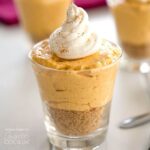 This easy no bake pumpkin cheesecake with ... END_OF_DOCUMENT_TOKEN_TO_BE_REPLACED 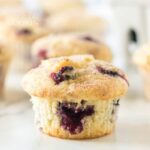 Blueberry Muffins are a mainstay in this ... END_OF_DOCUMENT_TOKEN_TO_BE_REPLACED 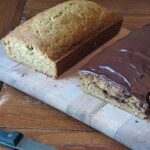 I'm in love with this recipe. It's the best ... END_OF_DOCUMENT_TOKEN_TO_BE_REPLACED 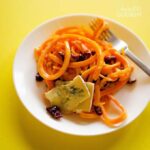 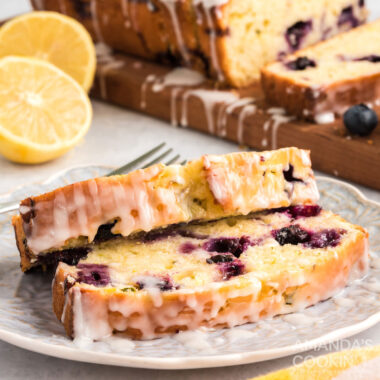 This pineapple dream dessert is one of my ... END_OF_DOCUMENT_TOKEN_TO_BE_REPLACED

I have always been a Claussen Kosher Dill ... END_OF_DOCUMENT_TOKEN_TO_BE_REPLACED

This no-bake Chocolate Lasagna is filled with a creamy ... END_OF_DOCUMENT_TOKEN_TO_BE_REPLACED

My family loves my soft peanut butter cookies and ... END_OF_DOCUMENT_TOKEN_TO_BE_REPLACED

Have you ever heard of John Wayne Casserole? Delicious ... END_OF_DOCUMENT_TOKEN_TO_BE_REPLACED

This creamy crockpot mac and cheese starts with ... END_OF_DOCUMENT_TOKEN_TO_BE_REPLACED