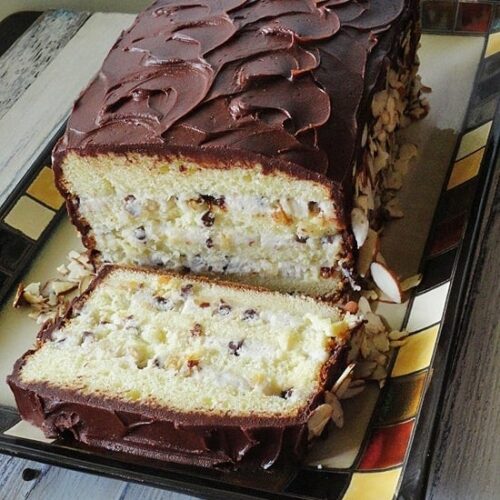 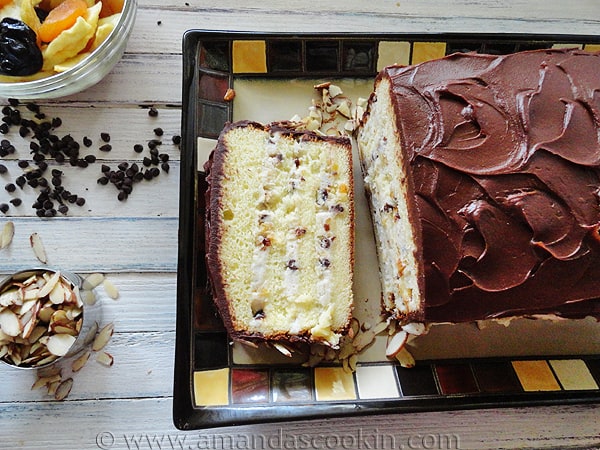 English Trifle. Tiramisu. Cassata Cake. They all have similar texture and flavors, and I frankly love them to bits. You know that face when someone puts a forkful into their mouth, their eyes close, and utter pleasure seeps out their pores, causing their body to relax and a moan of pleasure to escape their throat? Yeah. So that’s me when I eat any of these desserts. 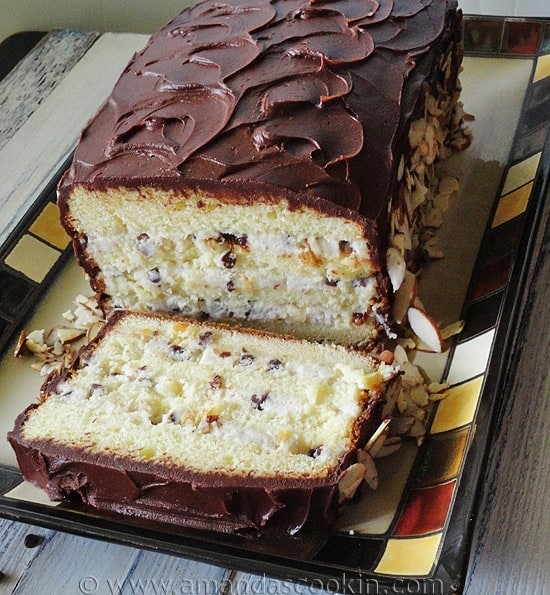 As a little girl I remember spending all of our holidays at my aunt’s house. I never really liked going to her house, she had far too many rules for a rambunctious 6 year old, but the food was worth it. It was worth putting up with the rules about the white carpet, removing your shoes, not touching any of her curio cabinets, and everyone having a turn at doing the dishes. Because she was 10 years older than my mother, all of my cousins were much older than me, all in high school with me barely out of 1st grade. 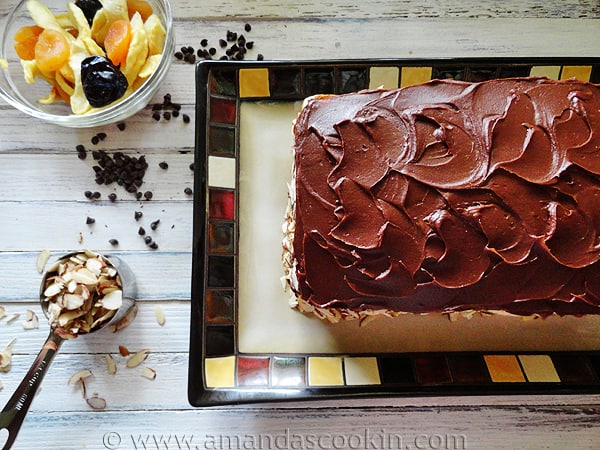 That meant no toys to play with and nothing to do, and nothing to watch since football dominated the only TV in the house. So it was me and my brothers and a stack of coloring books. That is, until it came time to eat. That’s what made it all worth while. Dinner was always good, but I looked forward to dessert more than anything. My aunt’s lemon tarts were to die for, and her English Trifle? Pure taste bud pleasure!

When biting into this cake I was reminded of the flavor of that trifle, most likely due to the cream sherry that I subbed in for the orange liqueur. A traditional Cassata Cake hails from Sicily. I’m a British girl, but I married an Italian, so I guess this is a fitting dessert for me. 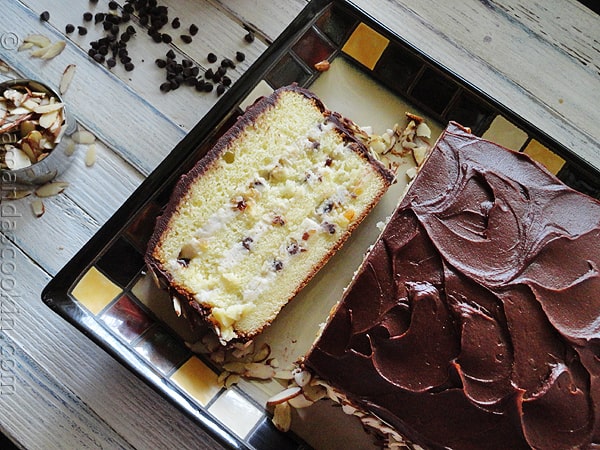 According to Wikipedia, and I quote:

The cassata siciliana consists of round sponge cake moistened with fruit juices or liqueur and layered with ricotta cheese, candied peel, and a chocolate or vanilla filling similar to cannoli cream. It is covered with a shell of marzipan, pink and green pastel colored icing, and decorative designs. The cassata is finally topped with candied fruit depicting cherries and slices of citrus fruit characteristic of Sicily. 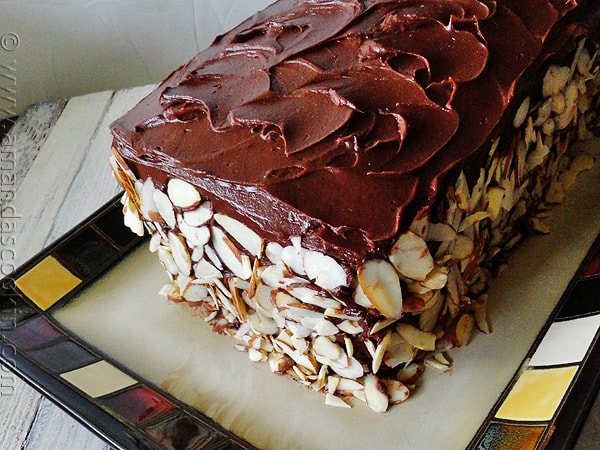 So while this version of Cassata that I found on Sargento’s website isn’t exactly like a traditional Sicilian cake, it’s absolutely perfect to me. I made a few minor changes to mine, most notably using cream sherry plus orange extract. I really couldn’t justify $22 for a bottle of orange liqueur when I had perfectly good cream sherry in the pantry! 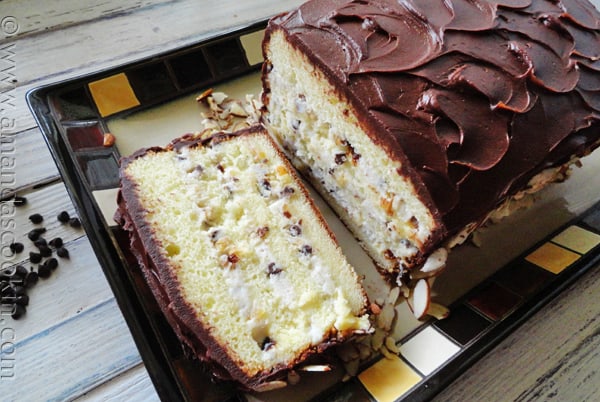 This cassata uses several of the traditional elements including a sponge cake, orange liqueur, candied fruit and ricotta cheese. Instead of marzipan, this sweet concoction is covered with a simple chocolate frosting then finished with sliced almonds. 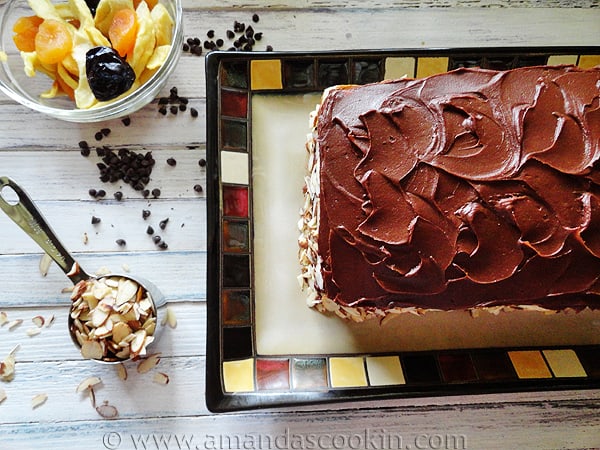 Because candied fruit is only available during the holidays, I bought some dried mixed fruit and it worked like a charm. It’s not quite as colorful, so next time I make this I think I’ll still stick with the dried fruit and add in dried cherries for a little color pop. I don’t think I could have enjoyed this cake any more than I did. I do believe this dessert will be gracing my Thanksgiving or Christmas table this year.

There’s a little bit of chopping involved, but not too bad. I chopped the dried fruit and the almonds too. Then just measured the miniature chocolate chips.

After mixing up the ricotta and sugar you’ll combine all the filling ingredients. I use my kitchen scale to ensure that I’m using the same amount for each cake layer.

You can certainly use a store bought pound cake for this. Instead, I baked my favorite – Elvis Presley’s Whipping Cream Pound Cake. The recipes makes two, so we ate one and I wrapped the second in plastic wrap and refrigerated it until I was ready to make the cassata. Refrigerating the cake makes it much easier to cut! You will split the cake in half lengthwise, then split those two halves lengthwise. Then layer the filling in between. Wrap and refrigerate. The only thing left to do is frost and garnish! Oh yeah, and eat! 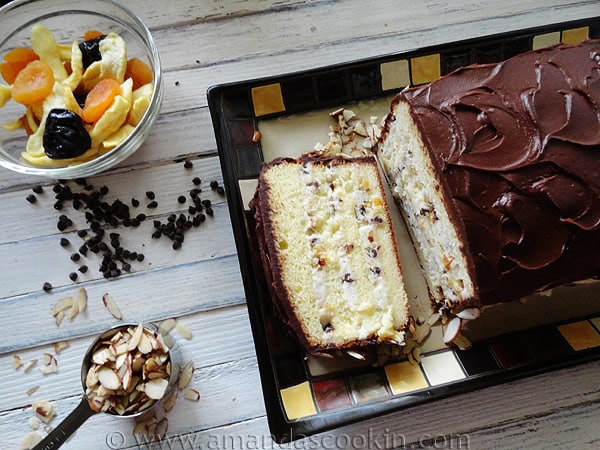 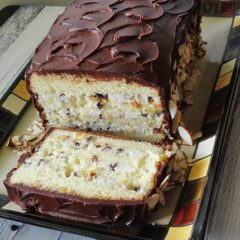 Cassata Cake. English Trifle. Tiramisu. They all have similar texture and flavors, and I frankly love them to bits. Try this Italian inspired dessert.
5 from 2 votes

It’s best to refrigerate the pound cake first to make it easier to slice. Calorie count based off of using my homemade pound cake.
Tried this Recipe? Pin it for Later!Follow on Pinterest @AmandaFormaro or tag #AmandasCookin!

Sargento did compensate me for the time I dedicated to making this recipe and putting this post together for you, however my opinions on flavor and preparation are 100% mine. :)

I grew up eating pot pies; the kind you take ... END_OF_DOCUMENT_TOKEN_TO_BE_REPLACED 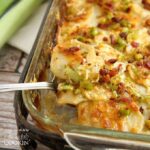 A tried and true family favorite, this ... END_OF_DOCUMENT_TOKEN_TO_BE_REPLACED 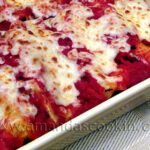 Lasagna is one of my favorite dinners, ... END_OF_DOCUMENT_TOKEN_TO_BE_REPLACED 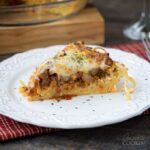 Spaghetti pie is a simple and classic dinner, ... END_OF_DOCUMENT_TOKEN_TO_BE_REPLACED

This pineapple dream dessert is one of my ... END_OF_DOCUMENT_TOKEN_TO_BE_REPLACED

This no-bake Chocolate Lasagna is filled with a creamy ... END_OF_DOCUMENT_TOKEN_TO_BE_REPLACED

My family loves my soft peanut butter cookies and my ... END_OF_DOCUMENT_TOKEN_TO_BE_REPLACED

Have you ever heard of John Wayne Casserole? Delicious ... END_OF_DOCUMENT_TOKEN_TO_BE_REPLACED

This creamy crockpot mac and cheese starts with ... END_OF_DOCUMENT_TOKEN_TO_BE_REPLACED