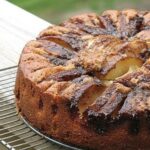 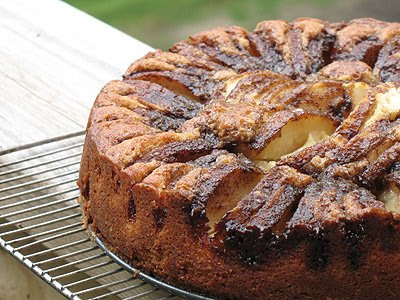 Sunday was our dear friend Pete’s birthday. Well Pete just happens to be Greek. We met him and his wonderful family about 20 years ago, not too long after they moved here from Athens. They are truly some of the nicest people I have ever met, or as my husband says “Pete is good people”.  Yes, it’s grammatically incorrect on purpose. ;)

Whenever they invite us over I always bring something along. The timing was perfect as the next recipe I needed to conquer from The Bread Baker’s Apprentice as part of the BBA Challenge was Artos, otherwise known as Greek Celebration Bread. I chose one of the options, the Christmas version, called Christopsomos, which is a sweet bread flavored with cinnamon, cloves, and nutmeg. It involves adding raisins, walnuts and dried cranberries and is then glazed with a honey and orange extract mixture and sprinkled with sesame seeds.
I wasn’t sure if I would have time to make the Christopsomos, so I also opted for a Greek apple pastry called Milopita. Sam, a Twitter friend and fellow food blogger, who just happens to blog about Greek food, shared his gorgeous recipe with me. While mine didn’t turn out as stunning as his, I plan to try it again and again until I get it right as it was a huge hit!
First up, the apples: 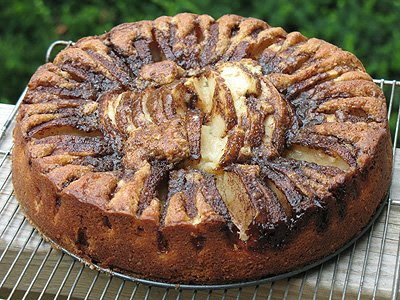 Milopita – Greek Apple Pastry
The first time (yes I made it twice) I made this I used a regular pie plate. Thank goodness I have grown used to placing my pans on a cookie sheet and I saved myself from scrubbing an oven disaster. The batter baked up and just didn’t have enough room in that pan, hence it bubbled over and out onto the cookie sheet. While it still tasted fabulous, it was certainly not presentable enough for Pete’s birthday. So I kept that one for us (my daughter almost polished it off by herself from Saturday into Sunday) and proceeded to make the second one, this time in a 9″ springform. Technically this recipe calls for a pie plate, and I asked Sam what he used. He used a 9″ DEEP DISH pie plate, so be sure and use deep dish if you try this. 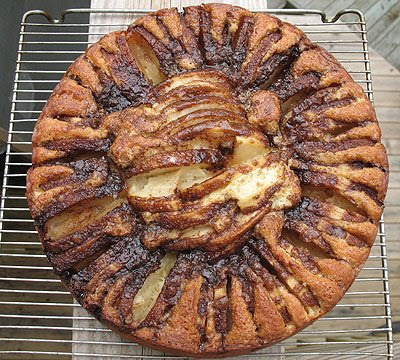 Note: This dessert bakes up into a delicious and beautiful cake, it’s marvelous warmed and served with vanilla ice cream. :) 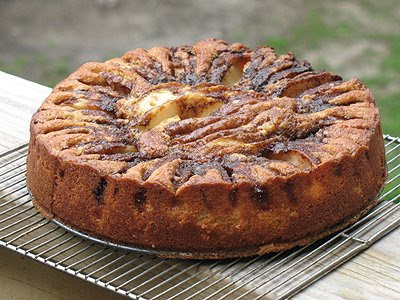 Milopita: Greek Apple Pastry
metric conversions available on Sam’s blog
This is the only photo I have of the sliced cake: 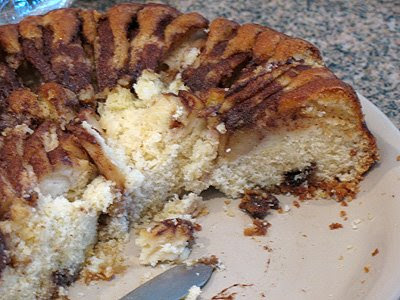 Oh, and just for fun, here’s the flop photo that my daughter devoured :) 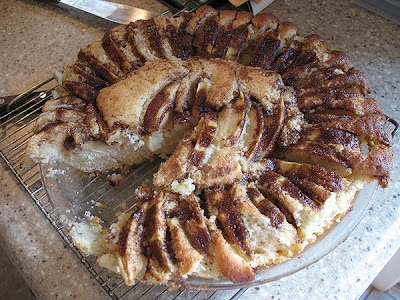 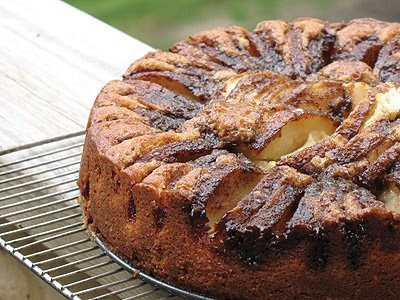 Tried this Recipe? Pin it for Later!Mention @AmandaFormaro or tag #AmandasCookin!
Next up, The BBA Challenge: Artos. Artos is a Greek celebration bread, the version that I chose is traditionally served at Christmas. The flavors and additions are what attracted me to this amazing sweet bread. This was such a big hit at Pete’s house that he insisted that I leave it for him, he loved it that much. The kicker? For many, many years, Pete and his family owned a bakery, so what better compliment could I possibly receive? Well, how about this one –>> His sister in law’s mother was there visiting from Greece. She didn’t speak a word of English, so her daughter translated for me. She kept turning the bread plate around and pointing at different areas, asking what was in it, how the glaze was made, and then asked me for the recipe. How could I possibly be any happier?? She has made similar breads (Artos) in the past, but loved this version and wants to try it herself. :) Success! 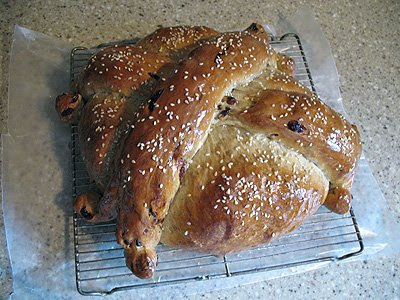 First off, this bread calls for using a poolish. A poolish is basically a bread starter, consisting or water, flour and yeast, then allowed to rest in the refrigerator overnight. I had a few blunders with this recipe and was concerned that it was even going to work out at all.
My blunders included:
– forgetting to warm the milk, resulting in a cold dough
– forgetting to adding the raisins, craisins, and walnuts when I was supposed to
– forgetting to separate the dough for the decoration on top
All in all everything went well. I am convinced that the aroma in my kitchen yesterday morning is what Heaven must certainly smell like. I didn’t have enough golden raisins, so I added in a couple of chopped orange essence prunes. I’m afraid I only got one picture of the sliced bread as I thought I would be bringing it home. Pete said no, it had to stay. :)
Hubby wants me to make another, only this time I think I will do the braided version for us. YUM! 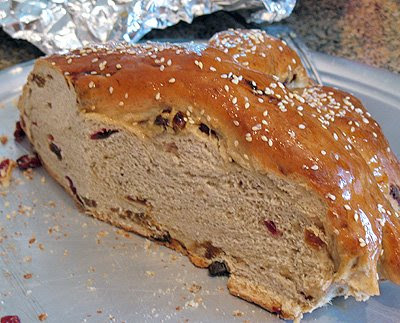 First you measure out a cup of poolish and let it sit at room temp for an hour, then add it together with flour, salt, yeast, cinnamon, nutmeg, allspice, cloves, orange extract, eggs, honey, oil and warmed milk. Although, I blundered and used cold mix it still worked out fine! 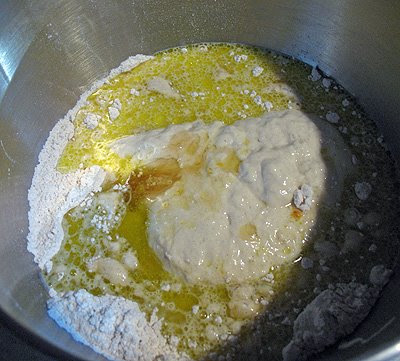 Mix it together until incorporated… 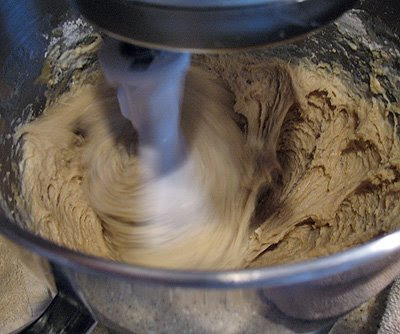 Then turn it out onto a flour surface, adding flour to make a tacky, but not sticky, dough. Knead for ten minutes. 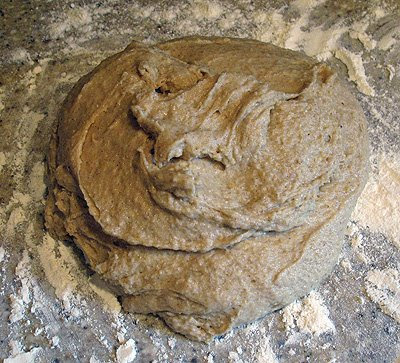 Add in the raisins, cranberries and nuts the last two minutes of kneading.  Let it rise in an oiled bowl for 90 minutes, or until doubled. Again, another blunder, I realized after I had placed it on the cookie sheet to rest, which is about an hour and a half later than I was supposed to. Added them in, cursing a few times, mumbling to myself that I needed more coffee. 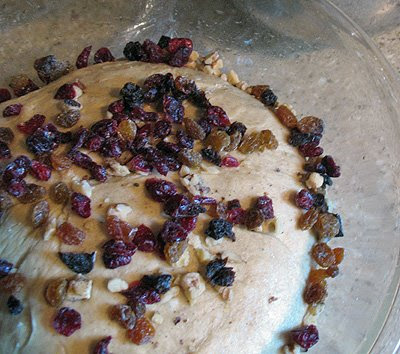 Next you have to separate the dough in two pieces, 1/3 and 2/3. Put the 1/3 piece into a plastic bag in the refrigerator to chill. Form the remaining 2/3 into a boule, which is a tight ball, pinching the ends underneath so that the dough will bake up into a ball and not spread out. Then place it on the cookie sheet, cover with plastic wrap, and let rise another 60-90 minutes. 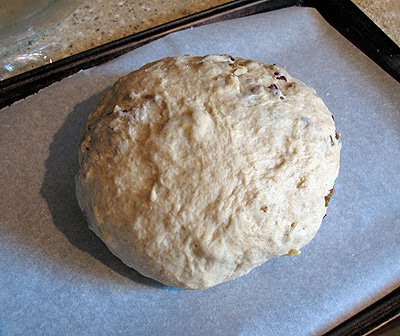 When the dough is ready to be baked, you remove the chilled dough from the refrigerator and separate into two piece. Roll into 10″ ropes and criss cross across the top of the dough ball. Cut the ends of the ropes and curl up. 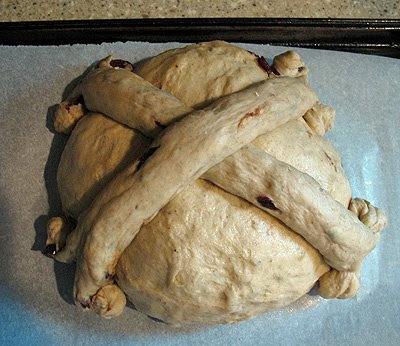 Once it’s baked, brush with glaze make from boiled sugar and water, honey and orange extract. Sprinkle with sesame seeds and let cool for at least an hour before slicing. 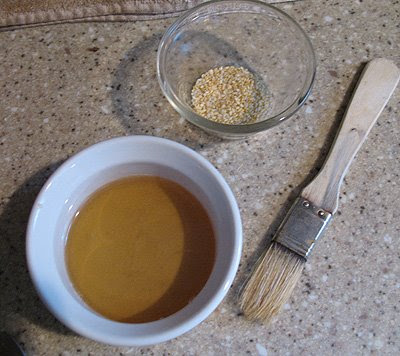 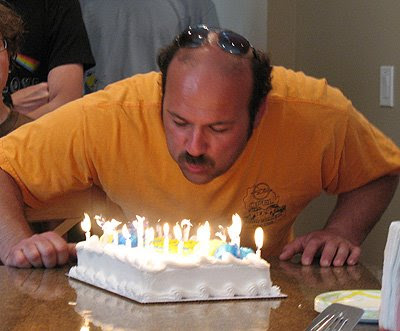 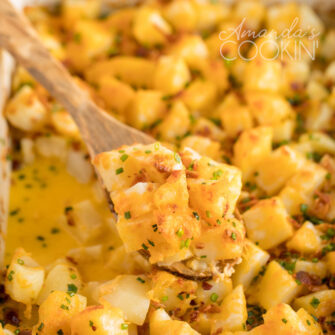